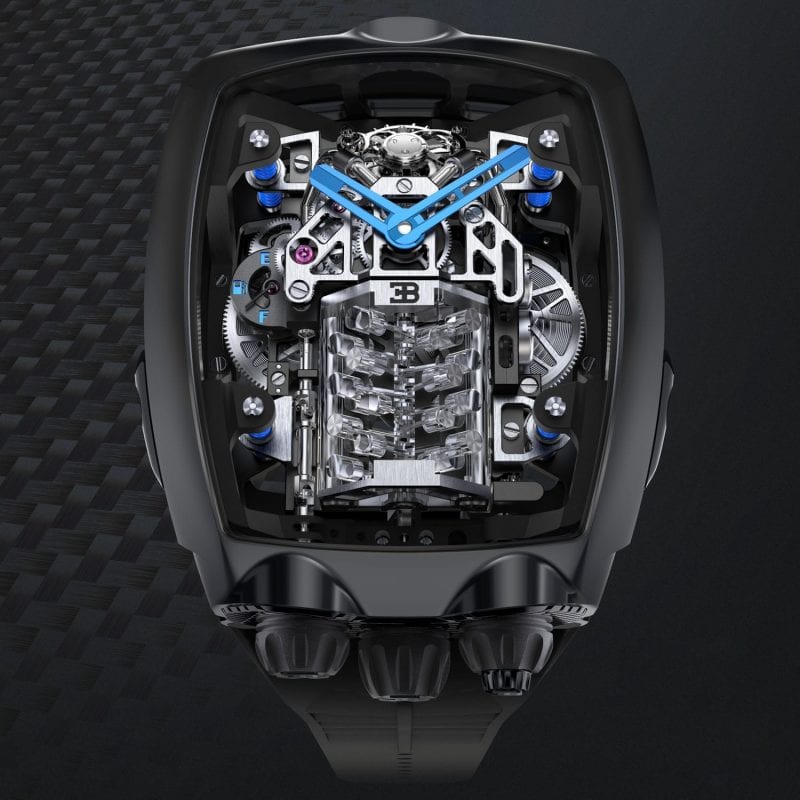 Jacob & Co.‘s latest collaboration with Bugatti showcases the watchmaker’s tenacity for making timepieces that straddle both the world of engineering and art. Meet the new Jacob & Co. Bugatti Chiron Tourbillon, with an animated W16 on your wrist.

You know a timepiece has something pretty amazing up its sleeve when the tourbillon is considered a secondary feature.  The Bugatti Chiron Tourbillon, houses a functional miniature reproduction of the W16-cylinder engine in the Bugatti Chiron racing car. At the press of a button, 16 tiny pistons churn up and down inside the cylinders of a complex crankshaft just like a real internal combustion engine that was milled from a single piece of steel at tolerances so precise, it took three days to program the CNC machines that produce it.  Two turbochargers (instead of four in the Chiron) on the side of the engine block spin while the engine runs, adding to the visual impact.

The case of the Jacob & Co. Bugatti Chiron Tourbillon is large and surrounded by sapphire crystals to free the view on the movement. The new watch elects for a single angled tourbillon (visible through a horseshoe “grille”) at the 12 o’clock position as well as a power reserve indicator at the nine o’clock position.  Four ‘shocks’ suspend the entire caliber, not only tying it even more to its automotive counterpart but also to increase its resistance to shocks. This offered quite a challenge in the development, as this watch uses three ‘crowns’ which need to be able to handle the motion of the movement. For this, Jacob & Co developed a transverse system that they also patented.

The center of three crowns positioned at the end of the case in the 6 o’clock position winds the movement barrel in the clockwise direction and the engine barrel in the counterclockwise direction.  The left crown is used for setting the time, while the middle crown winds both the mainspring for the movement, as well as that of the animation. When fully wound, the caliber has a power reserve of 60 hours. The crown on the right is, in fact, a pusher that starts the ‘engine.’ The watch is housed in a titanium case measuring 54 by 44mm.

The Jacob & Co. Bugatti Chiron comes in a blackened titanium case that echoes the sleek lines of its automotive inspiration. Priced at $280,000 USD, each Jacob & Co Bugatti Chiron Tourbillon watch is made to order so that that owner can customize the watch to match their car. Discover Opulent Club on Apple News.