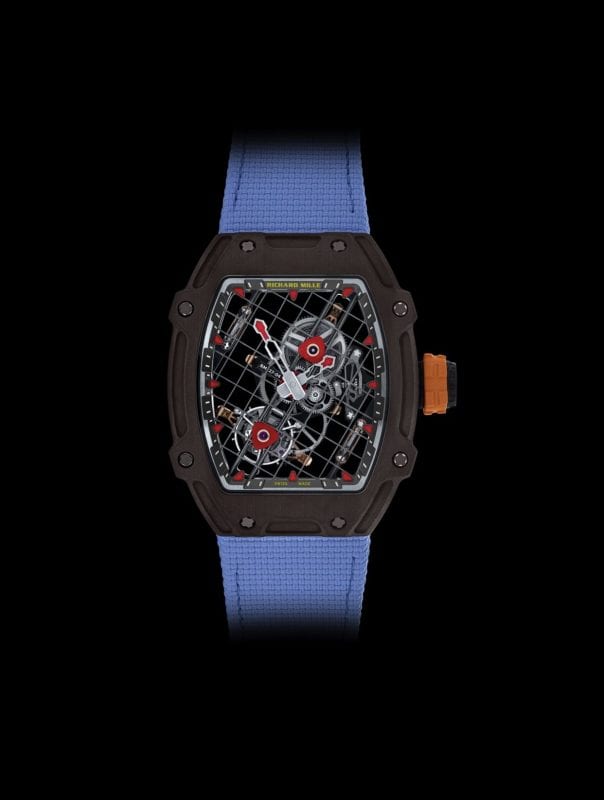 Richard Mille and Rafael Nadal continue its 10-year-long relationship with a new tourbillon RM 27-04 watch. Designed suspended tourbillon caliber to withstand an acceleration of 12,000 Gs a record for a Richard Mille timepiece.

In total, the RM 27-04 weighs 30 grams. The RM 027 is a marvel of engineering that is both tough enough to endure the incredible forces of life on Nadal’s wrist and light enough to float in water. To achieve this remarkable level of lightness and strength, the case which measures 38.40 mm across and 11.40 mm has been made from a new material made exclusively for watches called TitaCarb® that blends carbon fiber with polyamide.

The movement that has been fully skeletonized and can be seen from either side of the darkly matte featherweight case, diagonally manually wound, is then connected to the sieve by five polished grade 5 titanium hooks treated with 5N gold PVD, “secured” on the back of the plate.

Note that “Rafa”, the player’s nickname is engraved on the middle case of this RM 27-04 which will be produced in only 50 copies is available exclusively at Richard Mille boutiques worldwide for $1,050,000. Learn more at Richard Mille. Discover Opulent Club on Apple News.