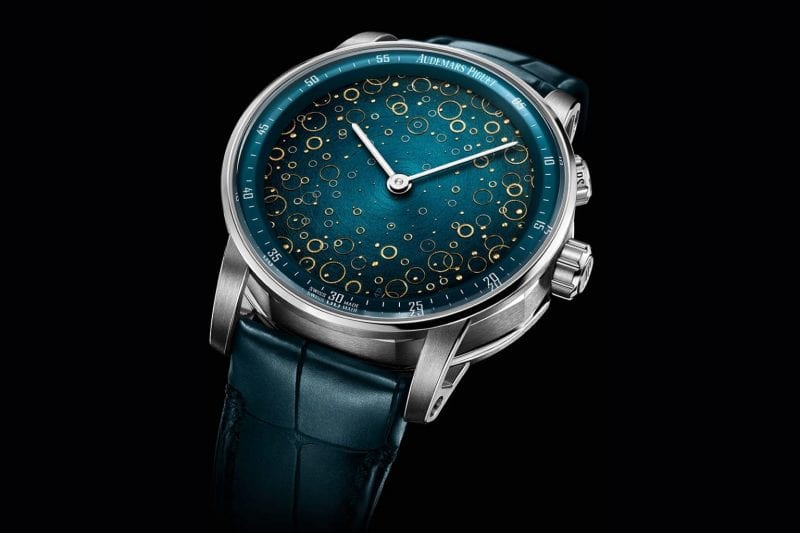 Chiming watches, take us back to the origins of watchmaking. Invented in the 14th century, striking clocks had no dials and announced the time with chimes.  The Grande Sonnerie Carillon Supersonnerie Code 11.59 takes the chiming watch to another level with 489 parts, and a full Grande Sonnerie Supersonnerie function that features three gongs and hammers (carillon). Beyond its technical innovation, the new Grande Sonnerie is represents the very best of Switzerland’s craftsmanship by topping it off with a dial created by Anita Porchet, one of the most legendary dial artisans in the country.

Unlike the traditional Sonnerie, Audemars Piguet’s mechanism is capable of chiming every hour, quarters, and minutes, but also has the added function of automatically striking the hours and quarter-hour much like a clock.

For the Code 11.59 by Audemars Piguet Grande Sonnerie Carillon Supersonnerie, Anita has created a trilogy of “Grand Feu” paillonné enamel dials hand-crafted with ancestral savoir-faire and tools. Each “Grand Feu” enamel dial is unique due to the organic nature of its materials, as well as the hand manufacturing technique and distinctive cooking time. A thin layer of glass sand mixed with water is applied by hand on the gold dial, before being heated at more than 800°C in a dedicated oven. The procedure is repeated multiple times to achieve remarkable transparency, depth and light. Each cooking session necessitates different temperatures and times; a perilous procedure requiring extensive knowledge of colour alchemy.