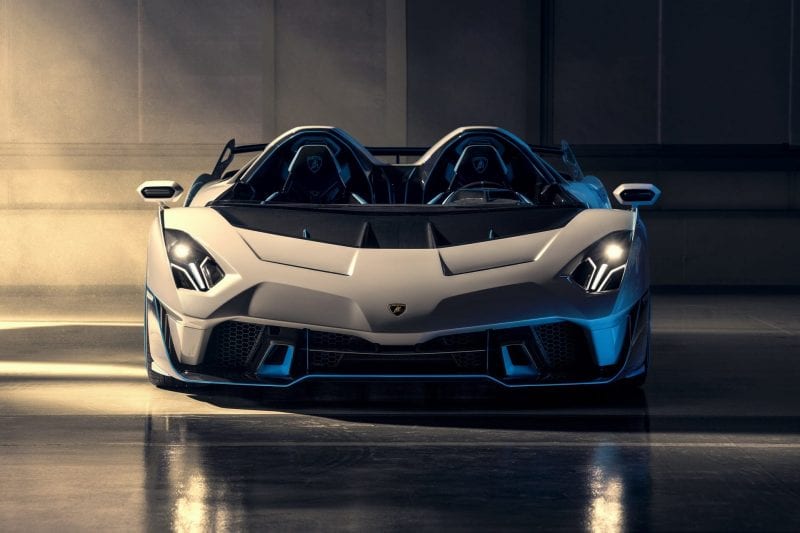 Lamborghini’s Motorsport division, Squadra Corse, is back with the latest project; the one-off SC20. The unique roadster was created at Lamborghini Centro Stile, to the exact specifications of an unnamed customer, who was involved in the project from the very beginning.

The body is made from carbon fiber and the car has a V12 engine producing a claimed 759 horsepower and 531 pound-feet of torque, according to a company press release.  All of this power will be even more noticeable than your “standard” Aventador, too, as the SC20 is a fully open-top machine lacking even one of the most vital components of a car: a windscreen.

Styled by Mitja Borkert and his colleagues at Lamborghini’s Centro Stile design department, the car uses carbon fiber for the monocoque chassis and bodywork. Lamborghini SC20 features exclusive details like the body colors on a Bianco Fu (white) base, created for the customer, on which the Blu Cepheus (blue) livery stands out. The same shade is used inside, alternating with Nero Cosmus (black) and Bianco Leda (white). Interior highlights include the carbon fiber dashboard cover, rear wall, door panels, center console and steering wheel trim, in addition to the monocoque itself.

Carbon fiber is also used for the shells of the seats covered in Alcantara and leather. The door handles on the other hand, are machined from solid aluminum. The air vents are created using 3D printing technology at the Sant’Agata Bolognese factory.

“The SC20 is a combination of sophisticated engineering, Italian craftsmanship, sportiness and advanced design. It is also an example of applying our V12 engine and carbon fiber to a radical open-top vehicle that unmistakably carries the Lamborghini DNA,” added Lamborghini CTO, Maurizio Reggiani.