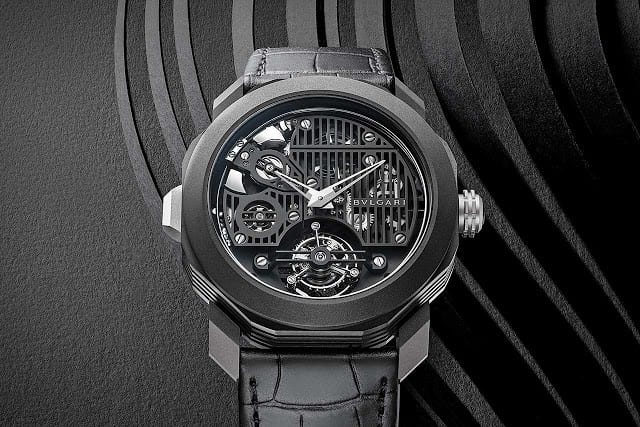 Just released as part of LVMH Watch Week 2021 is the Bulgari Octo Roma Carillon Tourbillon. Bulgari show once more that they are a brand that can harmonically combine great aesthetics with a technically very advanced movement, doing justice to their mixed Italian/Swiss heritage.

Octo Roma Carillon Tourbillon, an timepiece that features a three-hammer chime and a tourbillon regulator, all housed in a case characterised by a bold design. The hammers, gongs and tourbillon are exposed on the dial while the mechanics of the impressive new BVL428 manual-winding calibre can be glimpsed at through an openworked metallic grille bolted to the dial and more clearly on the reverse side of the case.

Unlike minute repeaters with two gongs, the Octa Roma Carillon Tourbillon uses three, which allows for a third higher note. The chimes are fixed onto the body of the titanium case, which has as much metal shaved away as possible to allow the chiming to ring clearly from its three openings.  A key ingredient to achieving the first is the wire gongs, which are folded around the movement itself. They are formed by hand before being hardened in an oven at 900 degrees Celcius. After this, they get cleaned and go into the oven again, now at 500 degrees Celcius. As a result, the gongs give off a crystal clear sound when the hammer hits them. Like the Big Ben in London, the Westminster chimes are performed with three hammers sounding three tones: the note C for the hours, the mid-re-C notes in sequence for the quarters, and the mid note for the minutes.

On the dial, the hammers, gongs, tourbillon cage and perforated surfaces are crafted in polished steels, while mainplate and bridges have been treated with PVD.  The black DLC-coated titanium case of the Octo Roma Carillon Tourbillon has a 44mm diameter and displays a matte finish. The new hand-wound Caliber BVL428 is 8.35 mm thick, and comprises a total of 432 components. The watch have a power reserve of 75 hours.

Available in an ultra-limited edition of 15 pieces, each with an engraved number from 1 to 15 on the crown to indicate its singularity. The Octo Roma Carillon Tourbillon will retail for EUR 290,000 ($350,979)  More information at Bvlgari. Discover Opulent Club on Apple News.