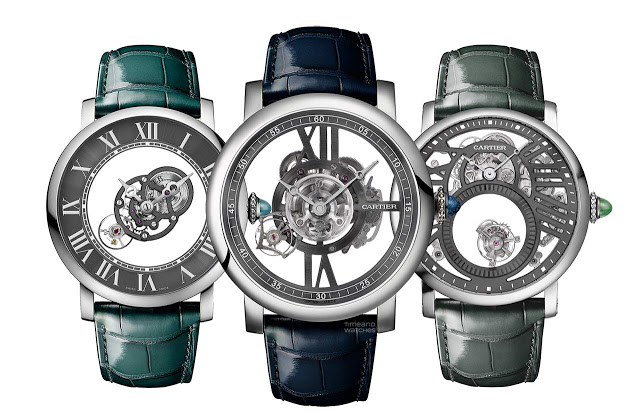 Cartier launches a masterpiece set in the Rotonde the Cartier Collection along with three Mini Mystery Clocks. Developed around the theme of the tourbillon and combined to two complications dear to the brand: the mysterious and the skeleton.

Created in the Cartier Manufacture in La Chaux-de-Fonds, the three new models offer different interpretations of this watchmaking classic. All of them are issued in numbered limited editions of just 5 pieces.

Rotonde de Cartier Astromystérieux: The Astromystérieux in an unprecedented interpretation which combines the Tourbillon with the mysterious, fittingly the mystery dial concept that anchors the watch was debuted by Cartier back in 1912, based on a concept by famed French illusionist and horologist Jean-Eugène Robert-Houdin.

The elemental platinum Rotonde de Cartier case measures in at 43.5mm, with this model paired with a cabochon crown in aquamarine.  The tourbillon carriage integrates not only the watch’s regulating organ but also the entire wheel train from the barrel to the balance which is all carried by a sapphire disc.

The elongated carriage ensures the function of the minute hands and completes one revolution of the dial every hour. The hand wound manufacture movement Calibre 9462 MC beats at 21,600 vibrations per hour with a power reserve of 55 hours.

Rotonde de Cartier Mysterious Astrotourbillon: With the Rotonde de Cartier Astrotourbillon skeleton watch, Cartier explores a movement conceived and developed by the Maison’s master watchmakers in 2016. The platinum case design follows the same pattern as its stablemate, but measures in slightly larger at an imposing 47mm. The hand wound manufacture 9461 MC calibre of this model presents two main peculiarities.

Power reserve stands at 48 hours at a 21,600 bph beat rate. Cartier once again matches the Astrotourbillon’s alligator leather strap to its cabochon crown, here with a deep midnight blue.

Rotonde de Cartier Skeleton Mysterious Double Tourbillon: Framed by a 45 mm x 11.9 mm platinum case features the brand’s signature beaded cabochon crown at 3 o’clock set with green jade. The skeletonised dial features a flying tourbillon that, unlike the classic tourbillon, has no upper bridge.  It performs a complete rotation in 60 seconds and appears to be floating completely free in space, with no visible connection to any gear train. The illusion becomes even more striking when the same tourbillon carriage performs a second rotation, completing an orbit every five minutes.