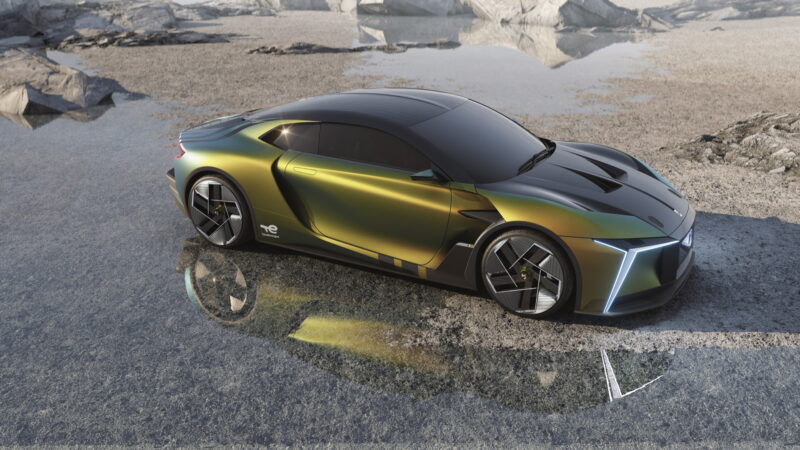 The two-time Formula E champion took the electric powertrain of its single-seat race cars and transplanted it into a two-door, two-seat coupe, with a combined 805 horsepower driving all four wheels. The front/rear split is 335 and 469 horsepower per axle, with a massive 5,900 lb-ft of torque at the wheel. DS estimates a 0-60 time of two seconds, with Formula E champs Jean-Éric Vergne and Antonio Felix da Costa taking the wheel in testing.

But those aren’t the best part. The DS E-Tense Performance Concept features a regeneration capacity of 600 kW. DS said that only regeneration will be used for braking, though it still has a braking system with discs and pads for safety. The race-inspired battery with carbon-aluminum composite housing mounted in a central-rear position for optimum weight distribution has  “an innovative chemistry and an immersive cooling system for cells”, according to the company.

The DS E-Tense Performance also features a suspension geometry that’s said to guarantee the best possible grip on roads, like on often-bumpy urban race tracks, and in any weather conditions.

The vehicle features new DRLs on either side (made up of a total of 800 LEDs) and two cameras instead of headlamps to collect data. Other styling highlights include the beetle-effect interference color contrasting with the gloss black surfaces and the 21-inch aero wheels. The back remains largely the same with futuristic LEDs, a massive diffuser, and a Formula-inspired brake light, while benefiting from the black-themed graphics and the E logo on the windscreen-less rear deck. The cockpit features bucket seats, a Formula E steering wheel, and an in-car Focal Utopia sound system with a pair of exclusive Scala Utopia Evo speakers in prototype colors. Discover Opulent Club on Apple News.