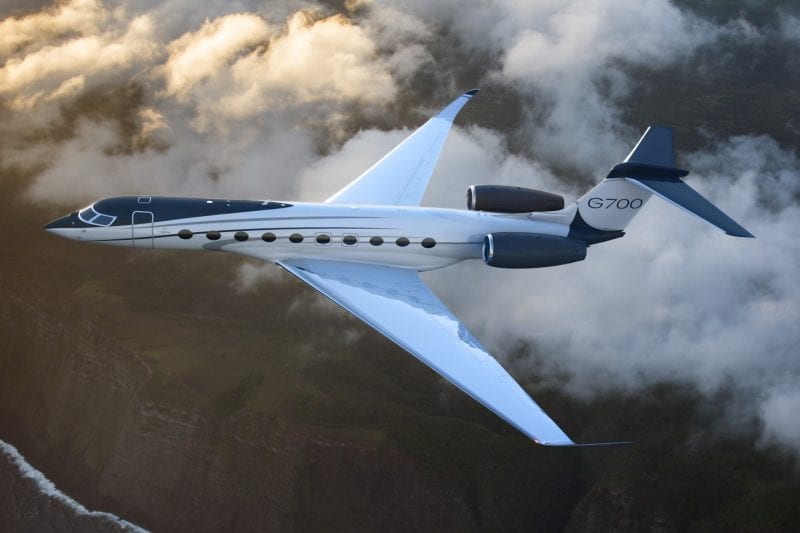 Gulfstream announced the G700, the Savannah, Georgia-based airframer’s new entry into the ultra-long-range aircraft category a model that aimed at Bombardier’s Global 7500. The company says is now the largest plane in the private jet industry.

The G700 has “the tallest, widest, longest cabin in our industry,” Gulfstream President Mark Burns said at a private-jet conference late Monday in Las Vegas. Coming in at 57 ft (17.35 m) long, over 6 ft (1.91 m) high, and 8 ft (2.49 m) wide. It has up to five living areas that seats up to 19 or sleeps up to 10. There’s also a six-place dining/conference area as well as a master suite with a shower. Other luxurious amenities include the circadian lighting system around the plane that recreates sunrise and sunset through white and amber LED lights. New to this airplane Gulfstream’s 3D audio system that actually turns the sidewalls into speakers capable of delivering rich high-frequency sound and impressive, wall-shaking base as near to surround sound as most people have ever experienced. The new Gulfstream includes a host of new technologies for passengers to control their media experience using their own devices, as well as cleverly concealed plugs to charge everything.

In terms of performance, it powered by two new Rolls-Royce Pearl 700 engines specifically designed for this new Gulfstream, the G700 will deliver a maximum cruise speed of Mach 0.925. The G700 is also expected to also share a common type rating with the earlier 500 and 600.