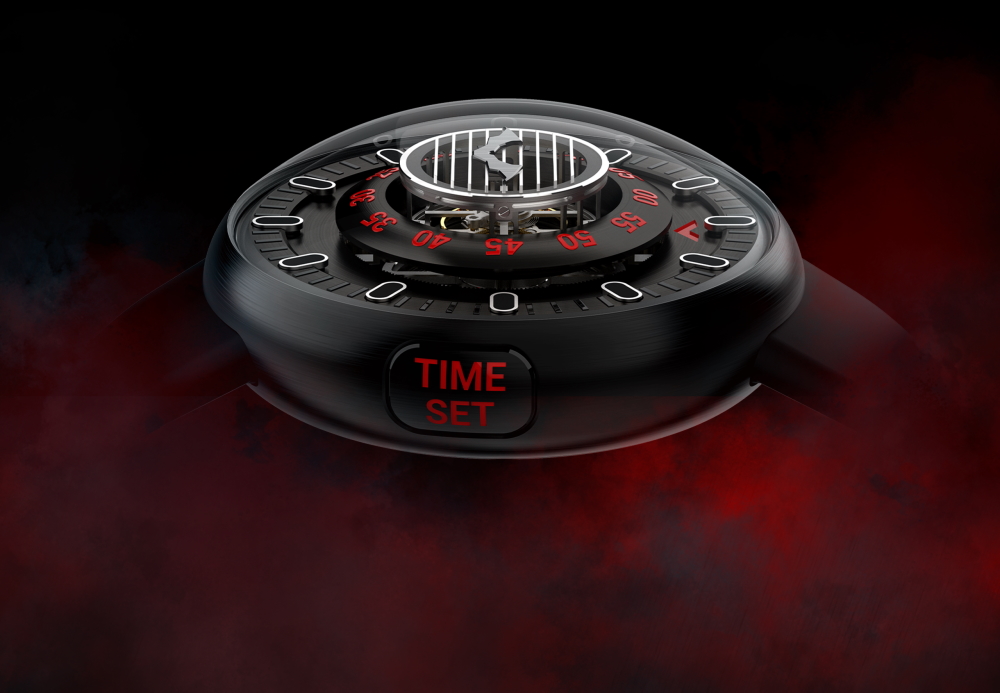 It features dark styling, an ultra-precise movement, and the Bat Signal representation so famously used to summon the DC superhero. Decked out in the black-and-grey aesthetic of Batman, the 283-part wristwatch houses a central tourbillon cage, which features the Bat Signal across a louvered surface. This allows light to filter through, enabling a glimpse of the regulator below.

The timepiece presents a different reading of hours and minutes. Its hour hand is affixed to a peripheral display mechanism orbiting 360° around the tourbillon. The minutes are displayed on a disk, making one revolution per hour. The barrel’s mainspring is wound by lifting the D-Ring found on the case back and turning it like a key. To set the time, the wearer simply presses the “Time Set” push button located at 3 o’clock while turning the case back D-ring in either direction.

The watch was created with a new version of Kross Studio’s in-house developed and produced caliber KS 7’000: the mechanical hand-wound 3 Hz caliber KS 7’001, with a 5-day power reserve. The view of this movement through the caseback is dominated by the central tourbillon escapement mounted to a set of narrow X-shaped bridges, flanked by a broad mainspring barrel decorated with a repeating Batarang motif. Kross Studio pairs the watch with a minimalist black rubber strap, along with a black calf leather strap featuring a chevron pattern inspired by Batman’s armored costume.

The watch comes with a set of one-click, interchangeable straps, one in black leather that’s embossed with the pattern of the DC superhero’s chest armor, one in black rubber with black stitching and one in red rubber with red stitching.

Each timepiece comes delivered alongside a functional Bat Signal that illuminates. It also hides a dedicated space on the backside to safely store ‘The Batman’ tourbillon watch or any other timepiece.

“We converted the Bat Signal into a functional piece of art, It’s a light, so you can use it to light up a room, and it’s also a watch box, so on the bottom there is a compartment to hide and store a watch.” Marco Tedeschi, founder and creative director of Kross Studio