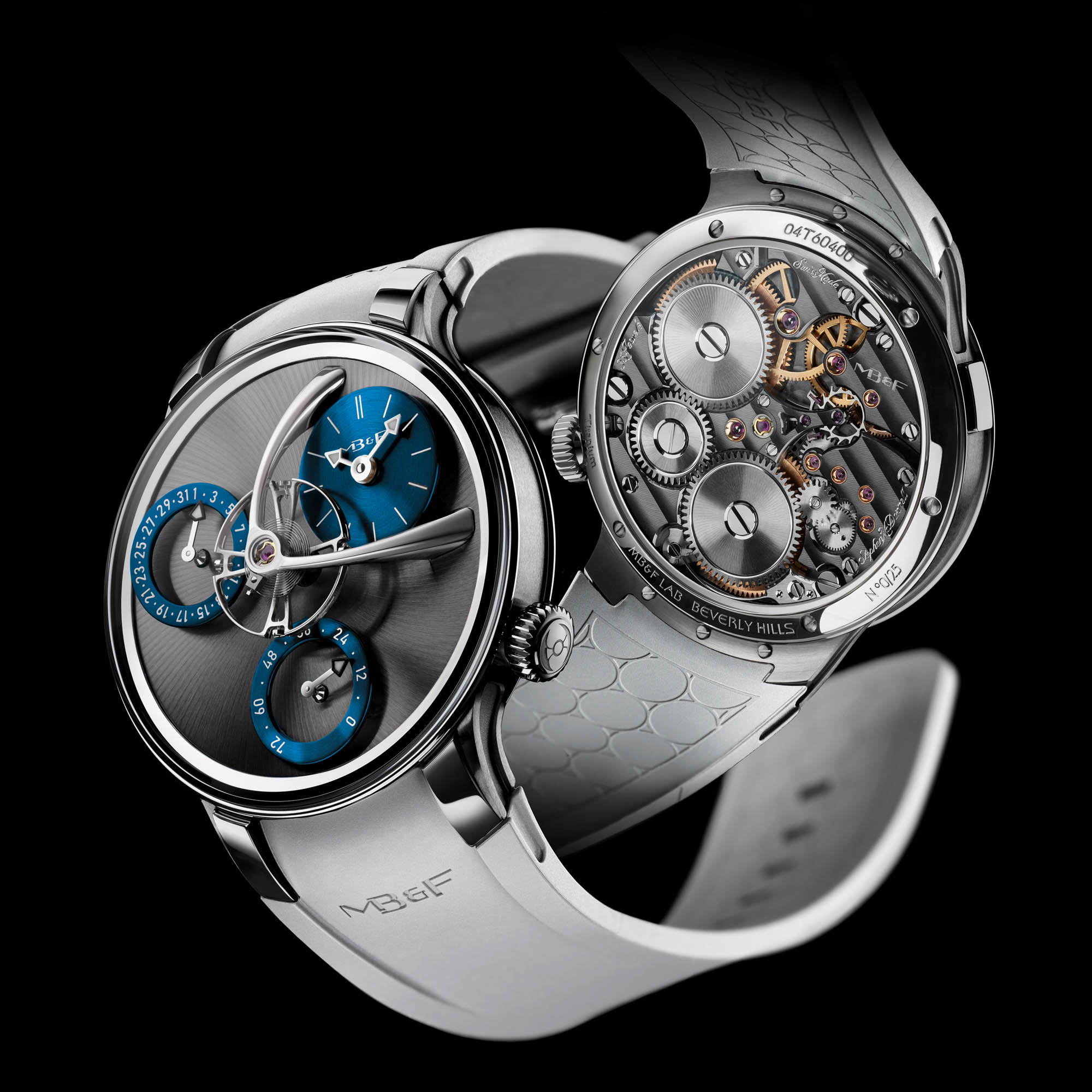 Following the LM Perpetual EVO, the LM Sequential EVO, and the LM Split Escapement EVO (first introduced as a limited edition for the United Arab Emirates’ 50th anniversary), MB&F is now introducing two new LM Split Escapement EVO editions. The first comes in grade 5 titanium with an icy blue base plate and slate grey dial and opened counters. The second edition is the first of a series of limited editions that will be reserved exclusively for the MB&F LABs a new retail format building on the success of MB&F’s M.A.D.Galleries.

This new case design features 80 meters of water resistance, a screw-down crown, an integrated rubber strap, and a bezel-free design. The manual-winding, 298-component movement is driven by double barrels providing 72 hours of power reserve, and features a user-friendly, foolproof rapid date-changing system that prevents the user from inadvertently damaging the movement when adjusting the date. Inside the case, the movement is suspended thanks to a world-premiere, monobloc shock-absorbing “FlexRing” system, dampening the kind of vertical and horizontal shocks that come with real-life adventures. The movement side of the LM Split Escapement EVO in grade 5 titanium features the special darkened treatment that creates a contrast between the wheels, the rhodium-plated barrels and the rose gold details.

The caseback of the LM Split Escapement EVO is fitted with a secondary sapphire crystal that features anti-reflective treatment to offer an unobstructed view of the movement within, Meanwhile, the watch itself is completed by an integrated rubber strap that has a matching titanium folding clasp.

The dial of the MB&F LM Split Escapement EVO follows an overall design similar to the original Legacy Machine Split Escapement model with a trio of elevated sub-dials that display the hours and minutes, along with the date and power-reserve indicator each appearing on their own separate register. Sitting center stage in the middle of the dial is the watch’s signature flying balance wheel that is attached by a large V-shaped bridge. However, unlike the original LM Split Escapement model, the EVO edition features all of its internals rotated clockwise by 30 degrees to create a noticeably different overall aesthetic.

Both new versions of the MB&F LM Split Escapement EVO are accompanied by an official retail price of $80,000 USD, and while the standard model will be produced as an unlimited edition and available through all of MB&F’s official retail partners, the Beverly Hills Edition will be limited to just 25 pieces worldwide, and the model will exclusively be sold at the MB&F LAB located in Los Angeles on Rodeo Drive. Discover Opulent Club on Apple news.