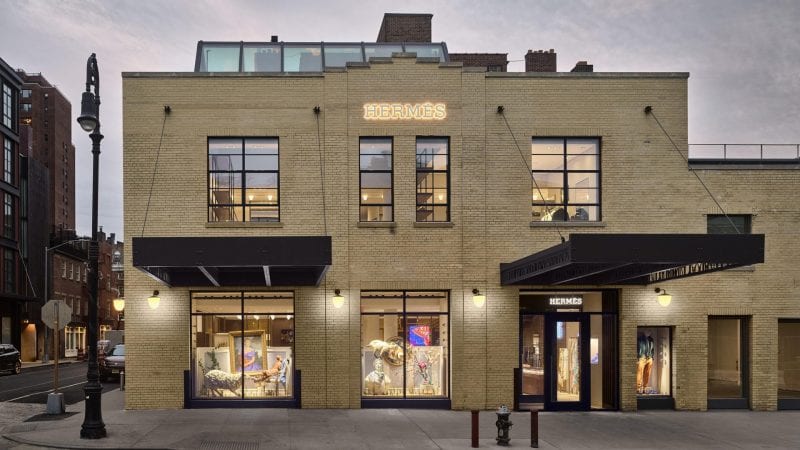 French luxury giant Hermes has chosen the once very fashionable side of Soho in New York, the Meatpacking District for its brand new store in New York, its 36th in the U.S.  Located a stone’s throw from the Highline, this Hermès flagship store reflects upon the company’s dynamic retail development with an unwavering confidence in the U.S. market.

The cobblestone-lined Meatpacking District is known for attractions including the Whitney Museum of American Art and the High Line. Other high-end stores nearby include a Tesla showroom and a Restoration Hardware flagship, are in the neighborhood while tech companies including Google are within walking distance, that drive a steady flow of traffic of both locals and tourists.

“The difference here is we’ll attract the next generation of Hermès clients,” Bob Chavez, president and CEO of Hermès USA

The new store which covers 5,330-square-feet Hermès store features inspiration from the neighborhood’s industrial heritage, the landmark building features restored ironwork and a yellow brick façade. The store also features many ‘unusual’ components such as an area with bar stools—where you can hang out and order free coffee, sparkling water or wine.

The product assortment also signals young and active to match the vibe of the neighborhood: a skateboard bag, a bicycle, a snorkeling imprint design, sneakers and casual apparel are featured alongside the company’s signature silk scarves, ties and women’s handbags.  The (new Meatpacking District store) really portrays Hermès in a whole different light to reach the next generation of customers. Discover Opulent Club on Apple News.