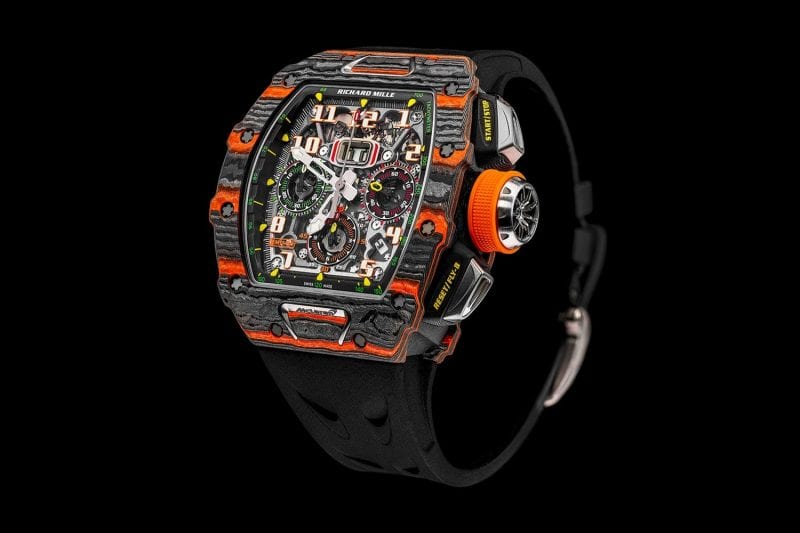 Richard Mille & McLaren Automotive has launched their first collaborative timepiece, the RM 11-03 McLaren Automatic Flyback Chronograph at the 88th Geneva Motor Show now from 8th to 18th Mar 2018. Limited to just 500 pieces globally and priced at 180,000CHF plus tax, the timepiece will be made available mainly to McLaren Ultimate Series clients.

The new RM 11-03’s design is influenced by the looks of previously-introduced McLaren cars, such as the McLaren 720S and F1. The RM 11-03 McLaren, created in close collaboration between McLaren Design Director Rob Melville and Richard Mille Engineer Fabrice Namura, has been in development since McLaren Automotive and Richard Mille partnered last year uniting a mutual interest in unique design, the use of new materials and modern craftsmanship.

The case is made of Carbon TPT interlaced with Orange Quartz TPT, resulting in an extremely resistant and lightweight case that features McLaren’s signature color. The Carbon TPT enhances the mechanical performance of the RM 11-03 and offers resistance to harsh environments. The RM 11-03 is fitted with the automatic RMAC3 caliber movement and 55-hour power reserve are also employed. The timepiece retails for $191,500