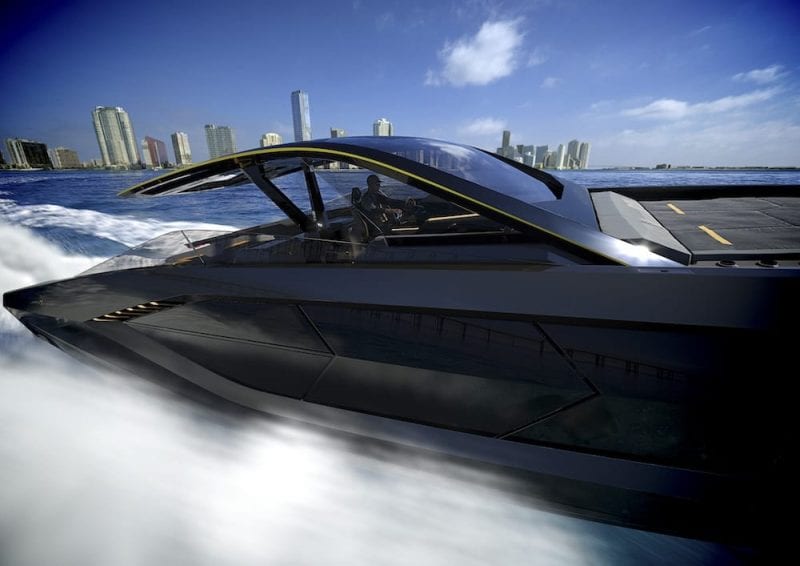 Italian supercar manufacturer Lamborghini has teamed up with The Italian Sea Group to produce a new super-yacht Tecnomar Lamborghini 63. Limited to 63 units, in reference to Lamborghini’s 1963 foundation, the first boat will be available at the beginning of 2021.

The yacht features two V12 engines developed by MAN that each produces 2,000 horsepower (1,491 kilowatts), propelling the boat to a top speed of  60 knots (69 miles per hour).  House design cues can be found all around the boat highlighted with a cutting-edge but thoroughly nautical appearance. The hull and the superstructure are created from a high-performance shell, developed by naval engineers specializing in hydrodynamic sciences.

Inside, Lamborghini’s angular styling is ever-present with plenty of clean lines, Y-motifs, and hexagon shapes used throughout.  As in Lamborghini’s supercars, the helm will be finished in carbon fiber, with Lamborghini’s Carbon Skin in the seats and on the dash. The steering wheel is also styled the same as a Lamborghini. The instrument panel resembles a Lamborghini car cockpit, integrating all navigation and control systems.  The engines even have the same start/stop button. Clients can choose from extensive exterior colors and livery options, while the interior is offered in two versions choosing from an extensive combination of materials.

The yacht is priced at 3 million Euros, or approximately $3.4 million. Discover Opulent Club on Apple News.