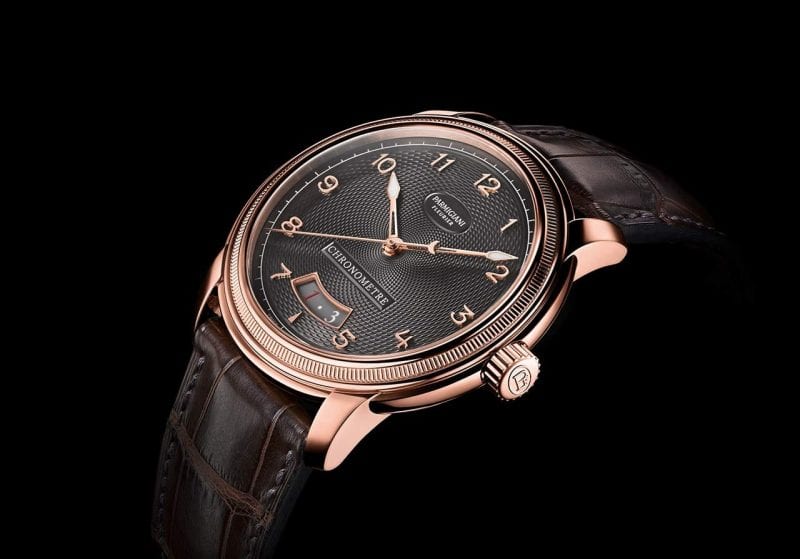 Following the introduction in 2017 of the Toric Chronomètre.  Parmigiani Fleurier revisited the aesthetics of the Toric, one of the flagship models of the brand as well as the first watch designed by Michel Parmigiani.   The new version Toric Chronomètre Slate featuring a hand-guilloché dial that evokes the spiral pattern of a pine cone. The arrangement of the scales on a pine cone is one of the innumerable examples of the Golden Ratio seen in the natural world. “The decoration is so captivating because it is based on the Golden Ratio”, says Michel Parmigiani. “Within it, you see Fibonacci’s spirals, reproducing a harmony that is everywhere in nature.”

The dial is completed by elegant javelin-shaped and semi-openworked hands complemented by a subtle minute track around the circumference and finely proportioned Arabic numerals. The elliptical Parmigiani Fleurier logo and the word “Chronomètre”, remarking that the movement has been certified by COSC, stand out from the decoration at 12 o’clock and 6 o’clock.

The 40.8 mm red gold case is characterized by a hand-knurled bezel houses the COSC-certified PF441 proprietary calibre. Its 2 series-coupled barrels deliver a 55-power reserve. The movement measures the passage of time in its most elemental form: hours, minutes, seconds and date. All of the components have been meticulously decorated to Haute Horlogerie standards – Côte de Genève and bevelled bridges.