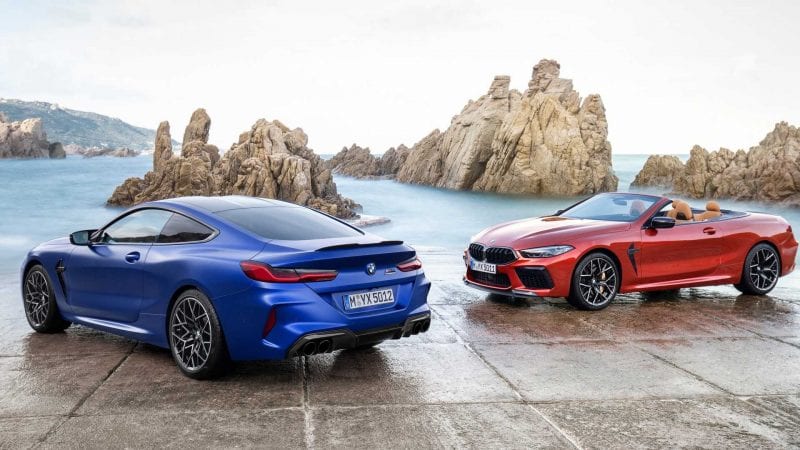 After countless rumors, spy photos the first-ever BMW M8 is finally upon us. And it truly is a first-ever offering, since the original 8 Series from the 1990s never received an M variant.  Available as a coupe or convertible, it packs the twin-turbo V-8 and all-wheel drive powertrain from the M5, along with a whole bunch of other improvements over the lesser M850i.

Regardless of the model, the M8 dispenses its power through an eight-speed Steptronic transmission to all four wheels via BMW’s xDrive system. As if the standard M850i xDrive weren’t enough, with its 4.4-liter twin-turbocharged V8 offering 523 horsepower and 553 pound-feet of torque and a 0-60 time of just 3.7 seconds, the new M8’s upgrades boost that output to a grand total of 600 hp. Competition models gain extra oomph, with 617 horsepower to create a seriously fast GT machine.

The exterior styling features the latest iteration of the twin-kidney grille, with carbon fiber surrounds, rear spoiler, and roof with the option M Carbon package. 20-inch M-specific wheels are part of the upfit. Inside, drivers get a new “setup” button that controls settings for engine response, dampers, steering, braking, and xDrive systems. Merino leather and several trim options, including carbon fiber, wood, and piano black, and a matching Alcantara headliner. A 12.3″ infotainment display is standard, along with the latest BMW driver assists.

Pricing for the base 2020 M8 coupe starts at $133,000, rising to $146,000 for the Competition model. Add $9500 to either of those prices if you want the drop-top version. BMW says production for all trims will begin in July 2019. The new M8 will make its public debut at BMW’s #NextGen event in Munich at the end of June. Discover Opulent Club on Apple News.