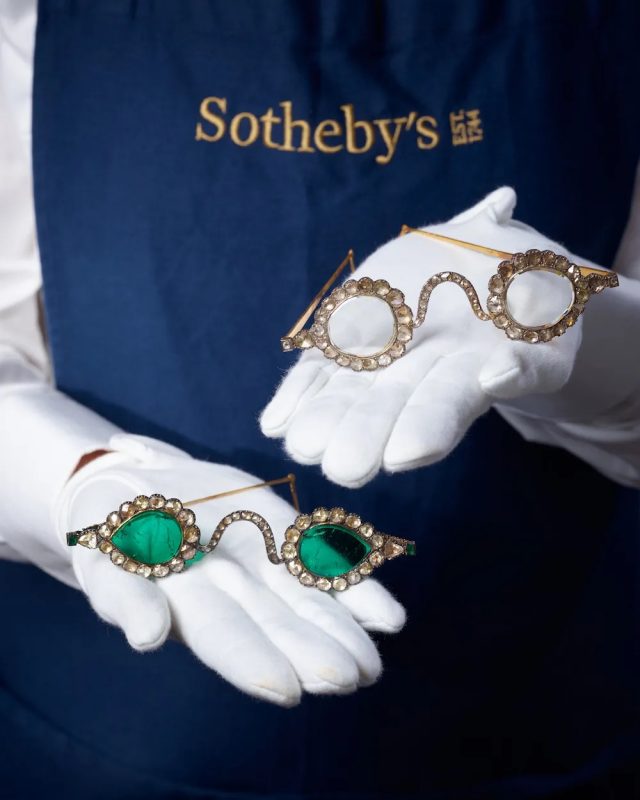 Two stunning pairs of diamond and emerald gemstones from India will go on sale at Sotheby’s upcoming Arts of the Islamic World and India auction scheduled for 27 October in London. The diamond pair named the Halo of Light, and the emerald pair named the Gate of Paradise have remained in the same collection for almost half a century, and are currently exhibited for the first time in Hong Kong (7-11 October) before heading to London. The spectacles will be offered at auction for £1.5m-2.5m ($2m-$3.4m) each, according to auction house.

“These extraordinary curiosities bring together myriad threads from the technical mastery of the cutter and the genius of craftsmanship to the vision of a patron who chose to fashion two pairs of eyeglasses quite unlike anything ever seen before,” said Edward Gibbs, Chairman, Sotheby’s Middle East & India.

The original patron for the spectacles is unclear but they are believed to have been commissioned by an unknown prince from Mughal Empire, the dynasty that ruled most of India and Pakistan in the 16th and 17th centuries. They were made by an artist by shaping a single diamond possibly the largest ever found it weighs 105.6 carats and they now together weigh twenty-five carats.

Gate of Paradise features two emerald lenses cut from a single gem hailing from Colombia, and Halo of Light’s teardrop-shaped emeralds also originate from a single natural Colombian emerald. The bevelling of the emeralds has been precisely angled to hold the intensity of the color in the stone.  Framing both lenses are rose-cut diamonds, which were added in the 1890s. Both sets of glasses were held by a princely Indian family until the 1980s. After that they were sold to European buyers.

These spectacles are said to have aided in spiritual enlightenment. According to Indian legend, diamonds were considered to illuminate and emeralds were believed to have miraculous healing powers and could ward off evil. Discover Opulent Club on Apple News.