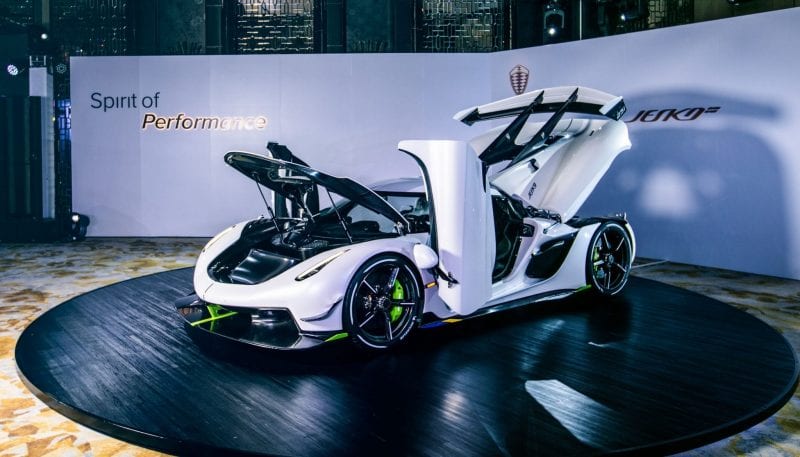 The Swedish mega-car manufacturer Koenigsegg has been famous for producing the most innovative and extreme performance sports cars.  Over the years, their hypercar continuously sets newer performance records as concrete validation of their achievements.  On the occasion of its’ 25th anniversary, Koenigsegg have officially announced its entry into the Southern China market.  Koenigsegg Automotive AB has appointed Kingsway K Cars Ltd. as the official dealer, to provide distribution, after-sales services and marketing in Southern China, Hong Kong and Macau.

To mark the occasion, Kingsway K Cars held a grand dealership authorization ceremony and the official car launch of the all-new Koenigsegg Jesko, made its first appearance in the Asia-Pacific region after Geneva Motor Show 2019 at The Ritz-Carlton Hong Kong. Joining the Jesko on display was the legendary Koenigsegg CCR – refurbished and upgraded by the Koenigsegg Certified Legends Program.

“I am delighted to officially welcome Kingsway to the Koenigsegg family,” said Mr. Christian von Koenigsegg, the Founder & CEO. “The Southern China region has long been a major market for hyper cars and with the invaluable support of such a special group of car collectors, our global presence is set to grow from strength to strength. Coupled with Kingsway’s solid experience and extensive networks in the supercar industry, it gives me great confidence in the brand’s prospects here. Today marks the beginning of what we all strongly believe to be a fruitful relationship for many years to come.”

“Today is a very special day and an important milestone for Kingsway,” said Mr. Albert Wong, Director of Kingsway K Cars Ltd. “Koenigsegg represents the pinnacle of performance hyper car, and it is a great privilege to partner with Christian and his company to take this brand even further to our customers in Southern China, Hong Kong and Macau.”

The brand new Jesko makes its inaugural appearance in Asia Pacific and the honored guests were able to admire the art piece up-close. Jesko is named for Mr. Jesko von Koenigsegg, the father of company Founder and CEO, Mr. Christian von Koenigsegg. As the ultimate continuation of the Agera line legacy, it incorporates the knowledge acquired in the 8 years of Agera development and combines with the technologies designed for a new era of performance. Allocations of all 125 units have been sold out. The retail price of the Jesko is up to $3 million.

The Legendary Classic – Restoration and Enhancement

The legendary model Koenigsegg CCR was also on display, giving the honored guests a glimpse of two of the world’s top sports cars. CCR was produced between 2004 and 2006, evolution of the CC8S with an upgraded body design, chassis and suspension, equipped with a more powerful engine, producing up to 806 horsepower, winning the Guinness World Record Award for “World’s Most Powerful Production Car” in 2004. The CCR managed to take the Guinness record for the world’s fastest production car at the Nardo test track in Italy by reaching 388km/h, in 2005. The CCR on display is one of the five right-handed drives versions in the world. The metallic orange exterior color, contrasted with black interior and orange stitching, along with the silver rims, revives its classic charm.

The CCR was refurbished and upgraded through the Koenigsegg Certified Legends Program at the headquarters in Ängelholm, Sweden. The aim of the program is to ensure that every historic Koenigsegg has been upgraded to the highest standards and also the best solution for protecting and maintaining the state of the legendary sports car. All certified legendary sports cars use the latest parts, equipment and technology to ensure the best performance and highest specification. Certified Legends represent the best of the brand and all Certified Legends come with a two-year factory warranty and the owners can participate in this program through the dealership to improve the car’s driving condition.

Koenigsegg Regera is the combination of innovative technology and luxurious comfort, with a sole purpose to achieve extreme performance and will soon make its debut in the Hong Kong market. The powerful twin-turbo V8 engine has 1,500 horsepower and three electric motors to strengthen the overall torque output, inheriting the Koenigsegg tradition as the most powerful car on land. Discover Opulent Club on Apple News.