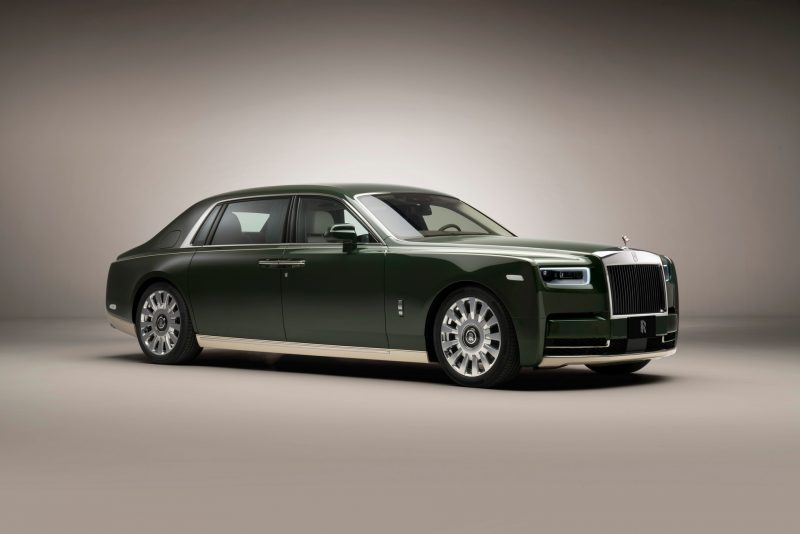 Phantom Oribe: A Bespoke Rolls-Royce Phantom In Collaboration With Hermès

Rolls-Royce Motor Cars unveiled Bespoke Phantom Oribe in collaboration with Hermès, as commissioned by the Japanese entrepreneur, art collector, and supercar enthusiast Yusaku Maezawa. Envisioned as a land jet, the model has a two-tone exterior that mimics the green and cream glazes of antique Oribe ware.

Based on the Phantom VIII, this model has been meticulously hand-crafted by both Rolls-Royce and Hermès inside-and-out. The upper part is finished in Oribe Green, a fully Bespoke color created exclusively for the client. The same paint will be available for use on the Maezawa-san’s private jet. Deep-green glaze is beautifully completed by the cream-white lower section.

The two-tone design continues in the cabin as Seashell White contrasts with Hermès Enea Green leather. The latter has been applied to all major touch-points and is joined by Hermès piping on the headrests and rear calf supports. The steering wheel, duchess handles, gear selector and the rotary controls for the motor car’s climate settings is finished in Hermès Enea Green leather.

Rounding out the highlights are a champagne cooler, a decanter storage compartment and lambswool floor mats. The model also has a unique Phantom Gallery as “Hermès commissioned an artwork based on a design by the celebrated French artist and illustrator Pierre Péron (1905–1988) who created many of the House’s iconic scarves.

Rolls-Royce CEO Torsten Müller-Ötvös said the car is a “magnificent expression of our pinnacle product” and brings “together two houses with more than three centuries’ combined experience and heritage.”