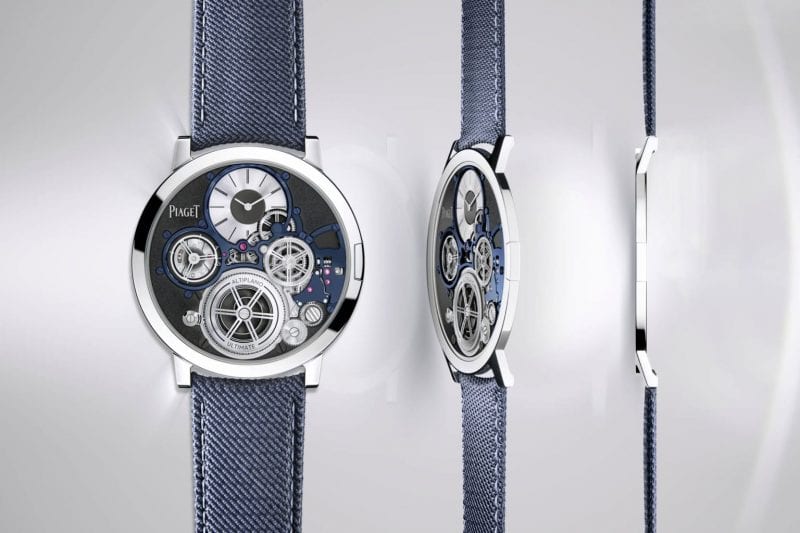 After nearly four years in the making, Piaget has officially rolled out the world’s thinnest mechanical watch, based on a non-production timepiece with the same name that was announced in 2018.

Developed and produced entirely in-house by Piaget’s dedicated Research and Innovation division. At 41 mm x 2 mm, this is the thinnest mechanical watch available on the market. For the initial production, the case is made of a lightweight cobalt alloy with a 0.2 mm thick sapphire crystal. Designed as a “total fusion between the case and the manufacture movement,” Piaget’s 900P-UC caliber is essentially built into the face, revealing an exposed mechanical system under the 0.2 mm sapphire crystal encasement.

How did they pull it off? Here are the steps to the secret formula: Components were engineered to the smallest tolerances possible, including wheels reduced from the conventional 0.20 mm thick to 0.12 mm and a sapphire crystal that is normally 1 mm thick pared down by 80 percent to 0.2 mm. Next came the winding system. To keep the slimness, components had to be removed, allowing the crown to fit flush to the case. The mainspring barrel does not have the usual cover or drum. Instead, it is mounted on a single, ceramic ball-bearing within the frame of the watch. Winding is done via a special tool that contains the clutch and sliding pinion to prevent over winding.

The movement beats at 4Hz, has 13 jewels, and features a 40-hour power reserve.

This Piaget Altiplano Ultimate Concept is now available for orders. Available in limited quantities in the frame of a bespoke customization service that will allow buyers to select a variety of options, including the colour of the bridge and dial, the finish of the hands and of the mainplate or the strap, and the price is on request. Learn more at Piaget.  Discover Opulent Club on Apple News.